Tod and Claire discuss Azathoth, which was first published in the Winter, 1938 issue of Leaves.

Note, this is a horror podcast, and may not be suitable for all listeners. This discussion of Azathoth is mostly centered around a shocking revelation about the nature of the cosmos and the origin of Azathoth, thanks entirely to The Prophetess Claire. Unless you are well-grounded in your perception of reality, please avoid this episode if you’re at risk of accidentally joining a cult.

Note, we’re going to London in February, 2023 as part of the London Lovecraft Festival! For details as they come, check in on http://londonlovecraft.com/ and surely that’ll be updated with the latest news about the festival and all the other cool shows going on that week.

Alternatively, you can cut out the middleman and just follow us on Mastodon at @podsothoth@mastodon.social, from where ever you get your Mastodon toots, and you’ll catch the very latest news on our London show and the London Lovecraft Festival in general.

You can also follow the show directly (sort of) at @podsothoth@alhazred.podsothoth.club, as long as we’re running our own Castopod server. Ack ack ack ack ack. It’s a little complicated. 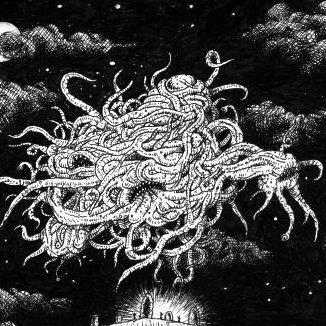 @podsothoth@alhazred.podsothoth.club In which @hotdogitsclaire and @todb discuss *Azathoth*, a story fragment published after Lovecraft's death. Or is it the basis, the genesis document, for a revived neo-Azathoth-worshipping cult?
RSS Podcast feed